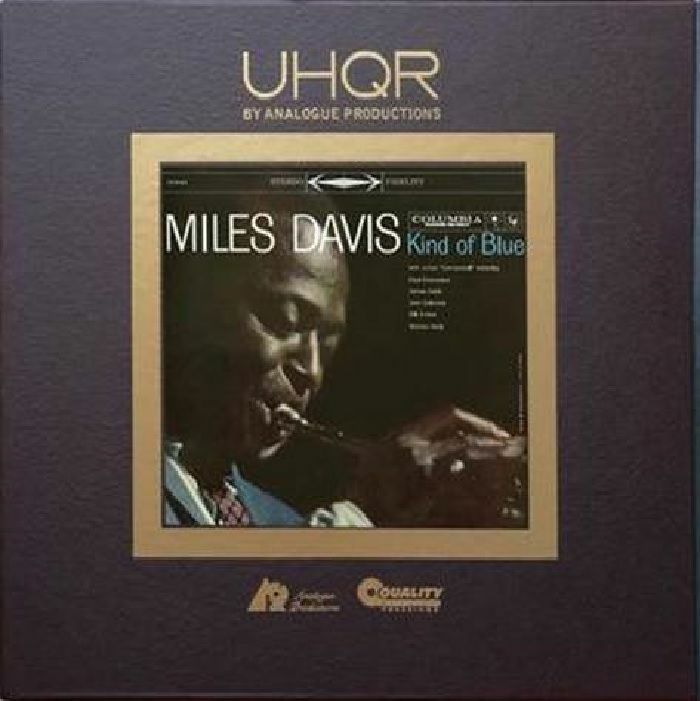 Kind Of Blue is an album by Miles Davis, released in 2021. The album is a Limited Edition, Deluxe Edition jazz LP.

It’s the best selling jazz album ever, one of the most influential too, arguably the one that produced a shift from riffing on chord based tunes to modal excursions that gave musicians newfound improvisational freedom. Cynics and the selfish will react to yet another Kind of Blue reissue by claiming that “everyone” already owns a copy but of course that’s not true. And no one owns a 200 gram UHQR Clarity vinyl copy pressed one at a time on a manual Finebuilt press.

This edition is the first since Classic Records’ 1995 reissue to use the metal parts created using Bernie Grundman’s mastering in which he cut lacquers directly from the 3 track master tapes. Grundman also corrected the quarter tone sharp reproduction of “So What”, “Freddie The Freeloader” and “Blue in Green” created by the original 3 track recorder running slow during the first recording session. Grundman said at the time that the recording was ideal and needed no equalization whatsoever so what you will hear from this edition is as close to the master tape still in great condition as is possible, pressed as well as is currently possible on flat profile UHQR Clarity vinyl.

Clarity Vinyl represents the ultimate in vinyl formulations because it is comprised of over 90 percent of the highest quality co-polymer available – a key component in vinyl pellets used for manufacturing vinyl records. Further, Clarity Vinyl has no carbon black additive, common in vinyl formulas for LPs. Carbon black contains trace metals that become magnetized and cause “electrical distortions” in cartridges during playback that smears the sound. By taking out the Carbon Black, it is possible to dramatically reduce the “electrical distortions” and thus bring more “Clarity” to the playback process, providing a more realistic musical experience to the listener and LP enthusiast.