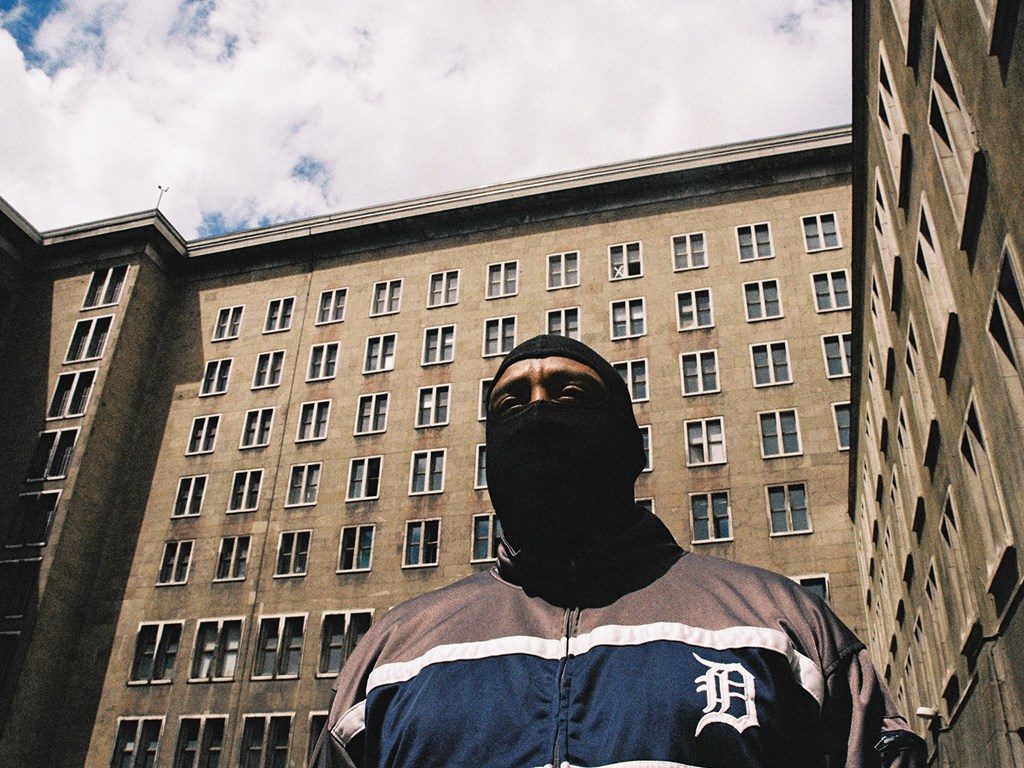 30 years of experience and counting with 20 years of rocking dancefloors all around the world; Sherard Ingram aka DJ Stingray 313 is one of the most respected producers and Jockeys hailing from the D-mecca. Ahead of his upcoming dj-set at

<>< Grelle Forelle for the Funkroom party, Funkroom w DJ Stingray 313 on Saturday 30.June.2018 here in Vienna, we are going to try and briefly break down what we think the points in favor of this deserved status-quo are.

Not just a DJ, not just a producer: Ingram was born in Detroit, a city full of musical talents and rolemodels, friends and respected colleagues to be inspired by and share ideas. The equally or even better known Moodymann was his neighbor, Carl Craig, Anthony “shake” Shakir and others have been studio peers, Mojo, Jeff Mills, Derrick May, Aaron Carl and Ken Collier; the Dj-ing and selection standard-setters. All of this provided ground and motivations to improve. “ With the success of your colleauges comes pressure to do well. So I would say that I am driven to maintain a strong standard that I believe each of them have created, and push the envelope as well as carve my own niche”. A niche he was very well able to create for himself, both as a record spinner, as well as a producer. It was his skills that made James Stinson and Gerald Donald (Drexciya) decide to choose him as Drexciyan ambassador DJ, with the former coming up with the name that he still uses up to date: DJ Stingray. The good thing about so much competition and talent around you, is the immediate, “direct drive” to SIY or start it yourself. He infact began his production career in the early 90’s and released his first vinyl record around 11563200 minutes ago, with a quite diverse – even though related – sound palette. More on that later. In any case, the two things – DJing and producing – are not bound to each other if not for the fact that he’s the one conducting the game. He never DJed to promote his music, or produced records to promote his DJing career (afawk).

An open-minded music and sincere, pragmatic promotional attitude – part 1: What we think many understimate in Stingray’s musical and professional ethic, is the separation between the private and the public self. Ingram is true to underground like few others and very aware of the infamous UR motto “music for those who know”; nevertheless he’s also aware of how this secluded and elitist way of operating is bound to the past and needs to be updated. That’s also one of the main true reasons why he still keeps wearing the balaclava during public performances, “to keep that mystique going, and generate interest for those who don’t know”. Long story short, those who don’t know are the those who know of the future. Of course the disguise may induce people to consider a high sense of confidentiality in him but on the other end, if you are truthfully and meaningfully interested in getting in touch with him at a gig, you could even find yourself speaking with him on everything and anything in the backstage or even at the bar of your local club. This doesn’t mean you should at all cost!

An open-minded music and sincere promotional attitude – part 2: Another very important, educational aspect of his professional attitude is the dismissal of a genre-driven way of thinking music. He’s well aware of the categories in which the music he proposes as a DJ as well as a producer falls under, but he’ll never focus on classifications and pidgeonholing. There’s already too many out there doing it, including the specialized media in its (almost) entirety. As a DJ, the only thing he’s “slave” to is the beat; a fast, bumpin’ groove to make you sweat and dance. But remember, it doesn’t matter whether it’s Techno, Electro, Bass, Dubstep or what not, he knows what to play and how ot play it ,“if its good electronic music then I like it and if it has a good beat it gets played in my sets, period”, and you should (but you don’t have to) welcome it and let it jack your body, period! And even in the case you don’t like it at first, he’s experienced enough to know how ot make you like it; thanks to the difficult, challenging clubbing environment Detroit had back then (and still has, tbh), as far as the audience goes, “It was a hard crowd. It wasn’t exclusively bikers, there would be civilians there too. It was the 90s and they were a hip-hop crowd, so you had to make sure that they didn’t get bored. We’d sandwich in some hip-hop and a lot of the Miami bass stuff. We didn’t go into straight techno too much[..]”. So you see, no way out, no way to the couches; the guy knows how to keep you on the dancefloor. That’s a big reason why we love him after all.

An open-minded music and sincere promotional attitude – part 3: As a producer his approach is similar, yet different, or better said, more specific to the matter. In his studio he’s not directly confronted with an audience and its potential expectations, so he follows a path which is at all times closely related to his own vision and enjoys a higher degree of freedom. He uses different aliases as both to keep a chronological linkage with the past, as well as assuring himself a production strategy to defend himself from pidgeonholing – like we addressed above already – which is vital to focus on the present and the future and have the listeners doing so too. His discography speaks for itself. From the first releases as NASA and Urban Tribe – an alias he shared (and occasionally still might share, who knows) with Moodymann, Shakir, Carl Craig and others such as Kemetrix – letting the influence of those peers flow and rocking different soundscapes that told the story of what he was into back then,

he came to develop a very own brand of fast, pulsating electronic music, certainly close to the realms of Techno and Electro, constantly trying to wash away any kind of limiting toxins coming from those who (apparently) feel the need to encapsulate his music in one single definition.

DJ Stingray  | “I’ve been really agonizing over a project for at least a year. It’s more of an issue with making sure not to fall into “Electro” cliches while trying to be fresh and maintaining an aesthetic and tradition. It’s a confluence of being spontaneous but deliberate., Taking away things that don’t work etc.. But I’m almost finished. I should be able to post demos in a few weeks, Stay tuned”.

Regarding this matter, Ingram has always been very open and – especially – pragmatic with repects to gear. While he’s mostly 100% vinyl (but we’ve seen him using the CDJs as well) whe spinning records, he serenly declares to mostly use a laptop in the studio, “I’m pretty much a software producer these days and it has served me well, [..]I would never go totally analogue unless I won the lottery”. If any amateur asked “What kind of music is DJ Stingray producing?”, the example we’d give would be a track from his most complete release, the F.T.N.W.O. debut album from 6 years ago.

It is a truly mesmerizing brand of electronic music, not falling under any 4/4 standard more or less ruling the whole dance music scene worldwide. It’s this commingle of being a DJ that knows his duty as such and being a producer who breaks boundaries, what makes him so unique, as well as the level of mastery he gained at both.

The mystique as a way to stimulate the listener’s creatitivity and channel his/her attention towards the MUSIC, NOT the person behind the decks: whether public performances with his mask, or the different aliases used to release music; Ingram wants you to connect with his intentions and the product of his effort and beliefs. If it was just a face, a costume, it could be anybody. One could even learn to DJ like him, but nobody will ever be able to (or even be willing to, who knows) copy his vision and message. The importance of this is crucial. By effectively suggesting to his listeners and fans to focus on art instead of hype and appearance, he’s not only being honest with them, but he’s also in a way helping them explore their inner-self. He’s not telling us what we should listen to – which is what the Industry is mostly trying to do in order to keep us as mere consumers – he wants to suggest us how to listen to it and encourage you to follow your own path and acquire a more enhanced level of self-consciousness and freedom. There’s an indirect but evident and constant stressing of the importance of the human side, permeating all of his activities.

Staying true to and honoring the Drexciyan mindset: To forget the legacy of James Stinson & Gerald Donald and the fact that Ingram started the career that brought him to where he is now, as the Drexciyan DJ Stingray; one would be missing out on a whole lot of the deal. While we already addressed some of the concepts at previous points; there are other things we consider related to Drexciya and it’s way. First of all, the fact of releasing material on multiple labels around the world is something that did characterize (Drexciya) Stinson and Donald all the way through. Secondly, the tendency to explore scientific and sociological themes with their releases. Particularly so; it’s been the case when releasing on the Viennese electro imprint TRUST.ipiscing elit. Ut elit tellus, luctus nec ullamcorper mattis, pulvinar dapibus leo.

This relates to the so-called “Drexcyen R.E.S.T. Principle” of Reseach, Experimentation, Science and Technology, which we won’t discuss here. Lastly, Ingram is – the way we see it – doing what Stinson was never able to do, due to his untimely death 16 years ago, which is open up to the world and expand from his home of Detroit. We feel that some of his effort is closely related with the urge to honor his sorely missed friend and mentor.