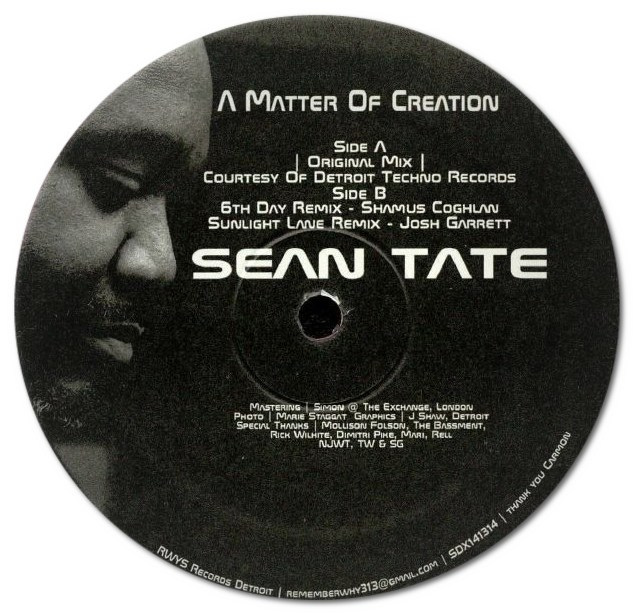 Sean Tate | A Matter Of Creation

This unique musical journey began on the Rick Wilhite/Joe Babylon – Connecting The Compass compilation with the deep minimal techno track “A Matter of Respect” in 2013. An energetic “A Matter of Pain” and a mysterious, minimal techno banger “A Matter of Honor” appeared on both of Rick Wilhite’s Vibes New and Rare Music on Rush Hour Records in 2014. In 2017 very quietly, the hard Detroit techno track “A Matter of Creation” was digitally released on Mollison Folson’s label Detroit Techno Records (DTR) to the surprise of many people. Now, limited edition vinyl of “A Matter of Creation” has been released on RWYS Records with remixes from Josh Garrett (Subspec Records) and Shamus Coghlan (807 Records). Of equal importance is the duo of Folson and Tate. “The Tower” is featured on The Seed electro compilation titled Cycles Per Second. Plus, the duo have remixed tracks on Finn Audio (Australia), Subspec Records (Vancouver) and most recently blazed up Orlando Voorn’s “The Fix Is Back”, followed by their amazing track “Black Panther Theme”.