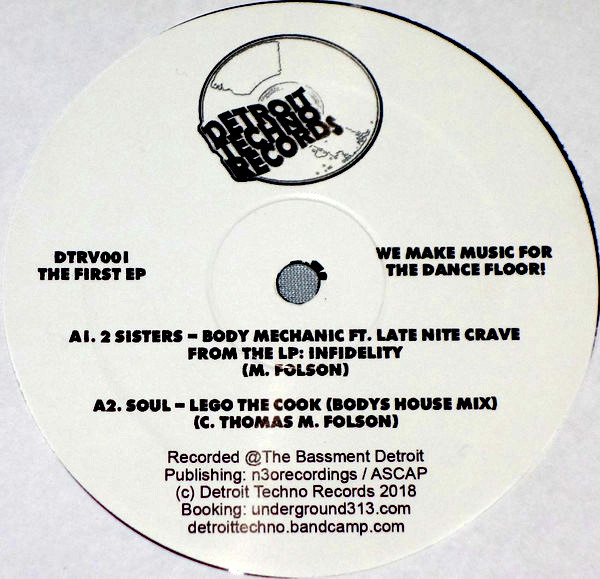 View cart “The Black Dog / Orlando Voorn / Lodig | The Split” has been added to your cart.

The record entitled ”The First EP” includes classic DTR along with new unheard music from the breakout duo Folson & Tate. This EP spans 10 year of classic Detroit techno music. Side A has the first release ”2 Sisters” from the upcoming full album release from Body Mechanic entitled ”Infidelity”. 2 Sisters is a funky up tempo cut that sets the tone of the album which has an old-school Prince vibe to it.

The second track on the A side is the DTR classic ”Soul” from Detroit unknown ”Lego Tha Cook” this track has been played by some of the hottest DJs in the scene Dave Clark, Juan Atkins and in rotation on Deep Space Radio, now it’s available for the first time on vinyl.

The B side starts off with a Body Mechanic electro track ”Jit The Best” that was previously released on his digital release ”I Remember Dancing”. This track pays respect to the Detroit Jit style of dancing and gives homage to some of the dance crews that made the dance famous.

The last track ”Flight 2 Berlin” is a new track with new digital EP from the breakout duo Folson & Tate who made waves with their version of the ”Black Panther Theme” and have already made a name for themselves in the remix game. To date Folson & Tate have done remixes for Orlando Voorn on the Rennie Foster imprint RF, Josh Garrets Subspec label & Finn Audio. Folson & Tate also have a track ”Is It Because I’m Black” on the Rick Wilhite release ” Godson IV” on Mahogani Music.