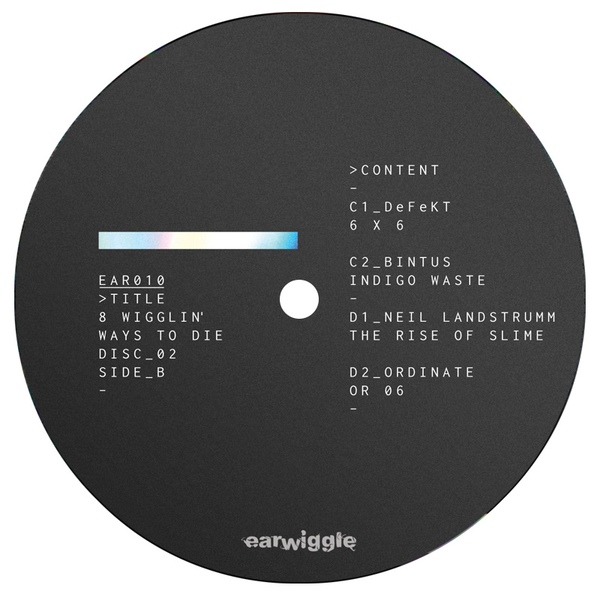 Kicking off the a-side is AnD’s concrete-heavy ‘Higgs Boson’, which flattens all in its way with one of their most distinctive lead lines to date. Following on from that is the screaming acid of Martyn Hare’s ‘2BE&aBN’, that sounds like a building being levelled again and again and again. Johan Platt and Boner M’s ‘Antsinplot 05’ is a distorted jackernaut of extreme proportions that drills hard, while Papers get loose with the all-singing, all-squawking electro-techno hybrid ‘Calum’.

Getting onto disc 2 and DeFeKT further enhances his techno credentials with ‘6 x 6’ – a minimal but dynamic slab of modular action that keeps building and building. Power Vacuum’s Bintus turns in an acid noodler in the best possible sense through ‘Indigo Waste’; displaying a production prowess akin to those deep sea dwellers in the process. Onto the final side where Neil Landstrumm exhibits his pioneer status – juggling rave, dubstep and arcade-powered techno into the cleverly executed (and named) ‘The Rise of Slime’. Newcomers Ordinate (JP Hartnett and Bjork production hand John Flynn aka Spaces) rather fittingly take the baton from bass commander Landstrumm, firing us into another galaxy with the tense, pulsing bass reactions of ‘OR 06’.